Someone told me that you always remember your first Palahniuk. After reading Lullaby I can see why.

Following Carl Streator is definitely 5 giant steps away from the Donna Tart I had just finished, or the Neil Gaiman I’m about to start. I wouldn’t go as far as saying that he’s one of a kind, but whatever he’s doing, he’s a master of it.
I feel very priviledged to think that we live in possibly the most diverse literary age there as ever been, considering those are a handful of the more mainstream contemporary authors. The diversity available to the modern reader is astounding. (You go, 2K14). 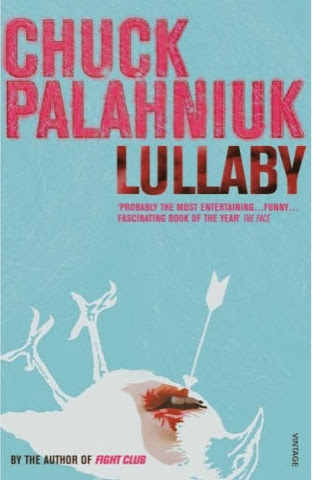 As I said before, Lullaby follows Carl Streator across various locations in America as he simultaneously tracks down first the culling song and then the grimoire it came from. It reads like a futuristic version of Dennis Wheatley. An intoxicating cocktail of old school occultism, post-modernism and B-movie horror.
Whilst reading – I was reading it on my kindle app which effected my pace – I found myself able to stop a lot, at times forced to, to decode and analyse what Palahniuk was pointing out to me. This book takes a lot of concentration from the reader, which is both exhilerating and hard going.
When I got to the end though I was miffed! I really could have kept reading a 100 more pages. Lullaby felt a lot like an extended short story, a metaphorically rich gif, rather than a snapshot of life. The running themes, or “horses” as Palahniuk calls them, carry this novel in a round, the repetition is both contemplative and progressive in that respect. The narrative voice is stead, mimicking the sound of Helen Hoover Boyle or Nash as they read the culling song.
The highlight of this novel for me is the imagery, I revelled inthe oozing sores of Streator’s blisters and the diamond encrusted bloody gums of Ms. Boyle. Thos is where I likened it to a B-movie horror, if anyone has watched Horror in the Attic, it is quite similar.
I’d heard a lot about Palahniuk before starting Lullaby, mostly about Fight Club, my tutor advised me not to run off though and try some other work by him before readjng that.
I feel ready to read Kurt Vennegut finally now, but I’ve no idea why they are linked in my head.

This site uses Akismet to reduce spam. Learn how your comment data is processed.